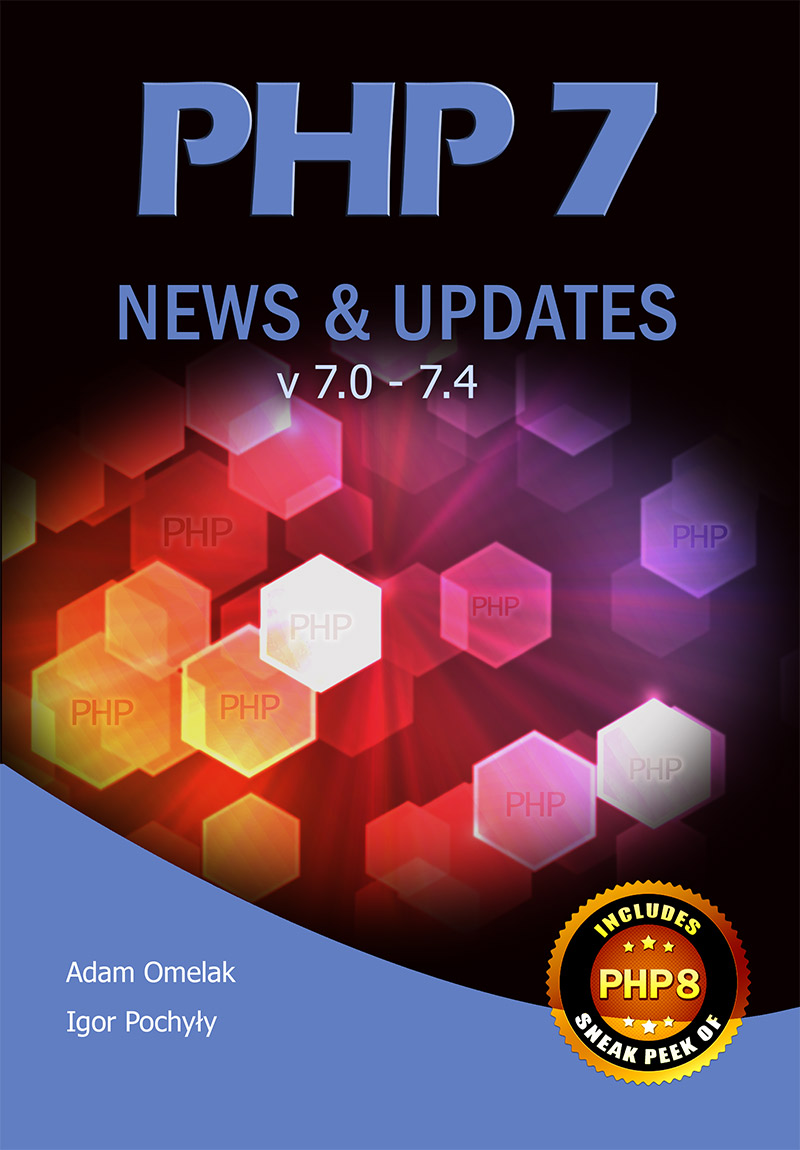 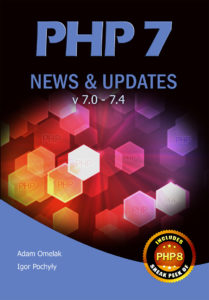 Are you still on a deprecated or old PHP version? Well don’t be anymore as PHP 5 is going to be dead by end of 2018! The same applies to PHP 7.0, so it’s really a good time to swap your work environment to something more accurate like 7.1 or newer. With this document your transition over to new terirory will be smooth and less painful than usual migration. Find out more what else this PHP 7 News & Updates book has to offer.

The book starts with some good history of the PHP language and why it looks so different from any other regular Object Oriented language like Java or C#. It provides the table with all the PHP versions life-cycles with end dates.

After that the book is all about the new versions included in PHP 7 family, those includes: 7.0, 7.1, 7.2, 7.3 and even 7.4 together with PHP 8 which technically hasn’t been officially released or announced yet to the public.

Each version includes a number of all new features, changes made, top 10 fixed vital bugs and deprecated or removed elements. Change logs are listed for 7.0 and 7.1 but I think they have been truncated to safe the pages. Either way changelogs are not really required as they are available on the PHP Github.
Things like Catchable Errors, intdiv(), Iterables, unicode support or scalar type declarations are all listed in here. To be honest I wasn’t aware of all the changes happening in new PHP world as the official PHP website does not list all the enhancements on one page.

In addition to the explained versions, we get also, Performance benchmark which compares some of the most popular frameworks and CMS like: Joomla, Zend, Symfony or Laravel between each versions. The reader is also presented with a Pitfalls chapter which intends to pay special attention to some new features and how avoid using them in wrong way.

The bonuses chapters includes some interesting reads on some PHP alternative tools for desktop applications, image manipulations and few other new tools available only to PHP 7 version. So have a look at them and be up to date!

For sure this hasn’t been written by English speaker and this in fact is true, however this doesn’t mean that the wording or sentences are any misleading or incomprehensible. The sentences are simples and short, easy to follow and read through in one go when driving on train or bus. The text is well formatted and readable, font is big enough but paddings aren’t too huge. Not a lot of images (which are quite common these days in order books to fill the gaps and increase the page numbers), not much of the language errors or DTP issues makes this book writing well thought and relaxing to read.

Every new feature has a well explained and practical example of usage. Most of the changes and updates in each version also have those listed below each of the topic. Even every fixed bug has the usage shown in this book, so it’s hard to say that this book is missing any of the examples inside. The only thing which does not have them are deprecated and removed features, but hey, if they are removed then why listing them, right? I found 3 or 4 bugs in the comments in usage examples but that’s all, nothing major which would impact the overall feeling.

Here is the biggest surprise, I could not find much of an argument against that book, it does all what it says on the cover, it’s “PHP 7 News & Updates” with really decent examples and descriptions. Event more than you can even expect, as it speculates about new future PHP releases and it promises to update every time when there is a new PHP 7 version released, now that’s a spot on marketing if you ask me.

If you are a PHP dev who still have some projects on PHP 5, then get that book now and stop complain about the migration to newer version. Amen.